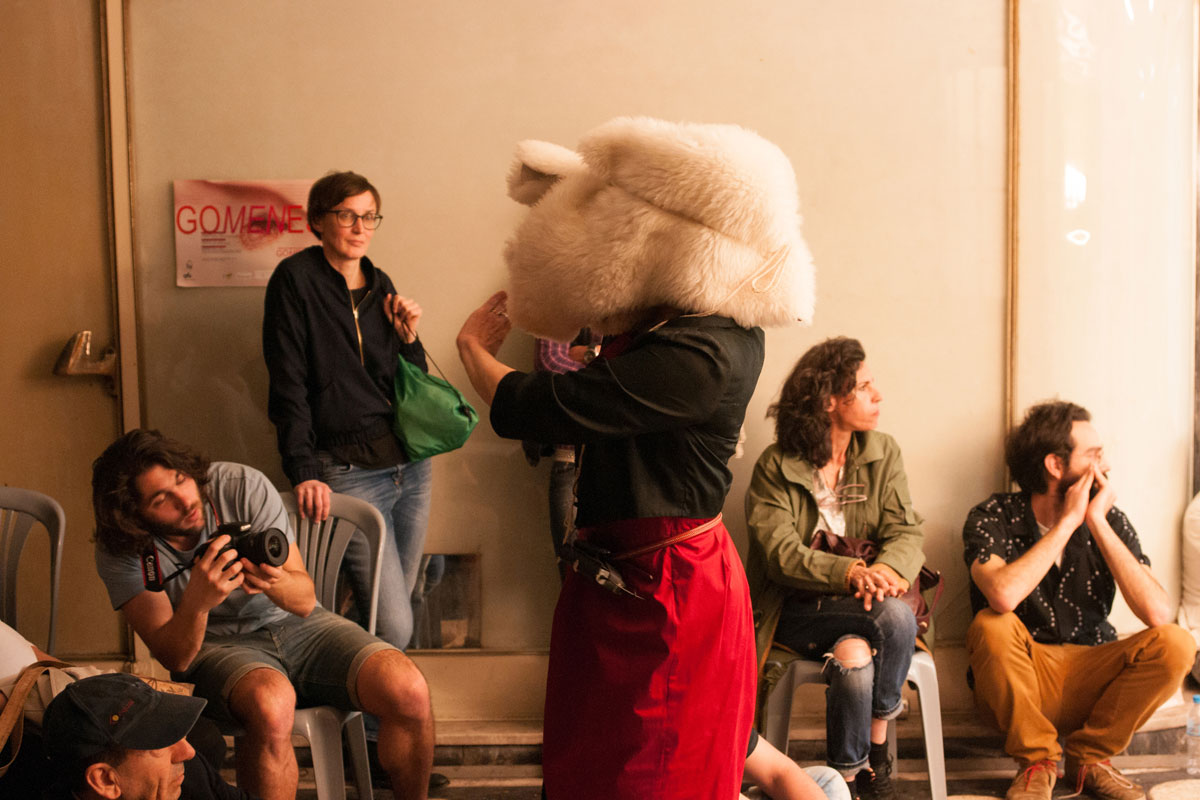 « I am happy for the Woman who came to meet us in the nightfall.

The nightfall is the bridge between the day and the night, the point where the shadows die and the sun allows you to look it in the eye. Many were expecting her, friends and strangers, people and things. She chose three from the circle of people. She gave out lots of notes with names and words. Eleni, Giorgos, Anthi, Demosthenes, Xenia, Maria, Truth, Love, Path, Breath, Rift and others. She said she collected them from friends here in Greece, that they were written spontaneously, which means that they come from the roots of the soul. They belong to her memories, I thought, she offered them as a scent of her joy, as a hand to pull us out of grey mud and the fear which rulers deliberately create. She asked those words and names to be made into a song. She introduced the rhythm on her flute. Because a song is a form of art and Art reveals the secrets; sounds – images -the energy of the world, material and spiritual. She spreads her joyful memories, (I thought again), she plants them inside us as seeds of infinite emotions. But not only that, she reveals the power of the metre of speech when it pulsates in a cavernous space, similarly to a poem, a spell, an oracle.

Later the Woman moved towards the audience.

The three stayed behind her. However, they continued like a chorus of ancient tragedy to sing till the end of the encounter.  They gradually abandoned the initial beat they had been given, they adjusted the metre as they liked, they enhanced the same words and names with the exhale of their breath, they improvised, they made, from the older forms, their own version and conception, they presented their art to Art.

She moved choreographically, following a music, different and soundless to us. She used slow, perpetual movements, ritualistic as if they came from a performance of Noh. Each of the movements had a special meaning, they functioned as a symbol which in order to translate, you first have to trust. Specifically, to view it beyond logic (free of queries, hesitations, questions) by sensing (impromptu), without emotion (the comparison), purely open, truly free of older formulas and entrenched behaviours.

She was gliding in the gloom in and out of us like a light touch. She wouldn’t speak at all but she was saying a lot.

She wore a sheepskin on her head, in an attempt to erase a face and project another. Without seeing, she came closer to us, felt our bodies, she was quietly asking them and they quietly answered in return, she was taking and giving, she was communicating, purifying, healing, like an ancient priestess who sends the message in brutal times that man is not just the mean but the final destination of every action. She kept showing how an essential contact takes place and she managed to turn us from total strangers into a company, in which each of us participated as they could. We were striding in a dialogue that was pushing us ahead, as everybody partook in the event, because we developed it by each of us contributing with our own diversity, regardless of the level of presence, degree of understanding, the size of excitement. We became, for as long as it lasted, one.

The Woman stopped gently. She revealed her face, strangely familiar now and more intimate. Two or three introduced her to the rest. They told us she was Valentine Verhaeghe, a name full of colours. She came to liberate me.  Because I, the 64 Panepistimiou Street, am an old, abandoned shopping Arcade in the heart of Athens, a victim of the economic crisis.  A Centaur, half a name; who in order to remember the dynasts, I host during the night people’s loneliness, and half a number; so my rage never fades, etched on the marble, so I resist, a name opposed to their numbers.”

Translation from Greek by Maria Nikiforaki