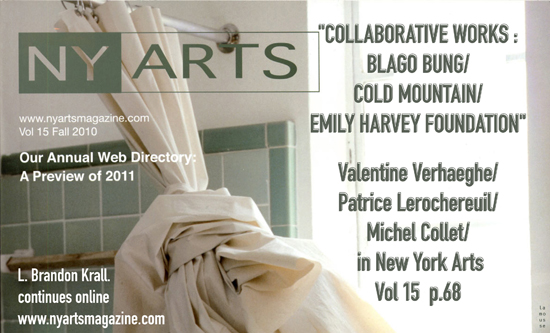 Blago Bang is a “Meta-ecriture” and every artist presents actions, dance or no-dance, art and no-art, performances, poetry, video, sound works. The pieces roll up quickly, come together randomly and collectively that gives a character, tonicity and joy. Free association is open, as in a dream weave or in the society imagined by Charles Fourier. The dynamic is present, irrepressible, linked to theoretical research, play, philosophy, politics, aesthetics, poetry and movement… -Michel Collet

The collaboration started in 2006 after a snowball effect of performances and interventions in France and America between Michel Collet, Valentine Verhaeghe and Patrice Lerochereuil with associated writers artists, non-artists and others. A naming occurred from which emerged the collective, activist-oriented node that we can call, Blago Bung. The name comes from two lines of the proto poetric-performance “KARAWANE” by Hugo Ball at the opening of the Cabaret Voltaire in 1916.

Michel Collet, a key initiator who operates the Cold Mountain and Mobile projects wrote: Montagne Froide is a creative device in the related areas of choreography, text, voice, images, sound and the machine (…) While using well-known types of devices such as performance, exposition as well as publications, our creations try to travel unexplored areas, far from the center or even half-way through a performance. Each creation makes it possible to assemble unlike elements that cohere as a whole tending to put form and questions about form, multiple appearances and esthetic games as wall as depth of meaning into play. Every action in Montagne Froide is managed by a team that is re-de?ned according to the project. Each action is co-created. The logical base of our productions relies on the concepts of the complexity and a non-specialized conception of art close to intermedia as de?ned by Dick Higgins.

About choreographer-performer Valentine Verhaeghe’s adaptation of “Mind Opener” a work by Robert Filliou, Astrid Gagnard wrote in Mouvement, Mai 2007:
What’s at stake ? Showing that today it is possible to work together and that the reasoning of the network developed by the concept generator, Robert Filliou is still applicable. This heritage has grown and is developed by each of the personalities working with choreographer Valentine Verhaeghe in the creation. Nine interpreters (dancers, poets, performers) are on stage, the tenth being video and sound. It is in fact a interactive system that is proposed by the artists brought together in Mind Opener. Therefore the broadcasting of the videos, that is generated by the presence and the relations between the dancers and the performers is random or predetermined. This version of the play using the technological means available in 2007 is faithful to the spirit of Filliou who wanted to create poetry with a computer. Far from the standardization of some shows, Mind Opener accepts the challenge of going beyond the definitions of dance and proposing the interpretation of this partition with the creators of different generations (…). The emotion comes from proximity with the spirit of Filliou in a artistic performance where dance, establishes a dynamic exchange with other parts. Between the lines can be read the story of a friendship : of Robert Filliou, of Daniel Spoerri and Emmett Williams; Spoerri who launched Filliou on the artistic chessboard and Williams who imagined that the soul of his friend Robert was reincarnated in an insect, as Julien Blaine says in his text narrating the last moments of the artist. Patrice, Lerochereuil says: If I were to describe my work. I will call it: “A field of approximative discoveries. » I try to approach and clarify what seems to me necessary and fundamental but pretty much useless in our society’s value system today. I realized early on that the idea of capturing a meaning or the effect of a thought is impossible. This make the origin of each piece very subjective. I always relied on my own sensibility and what I consider important. I have always prioritized thoughts/feelings, serendipity, over words formulations and, as an artist, concerned with process, origination over the final product. This dialectic simply implies the conflicts inherent in our efforts to communicate what is essential to us. For me it’s a matter of balance, as well as sways, back and forth and adjustment.

I do not choose a medium over another. I simply live with the fear of missing some possibilities by not experimenting with other media, (performances, paintings, video, music, drawings…). For example, my piece « partir c’est crever un pneu » (a French pun meaning « leaving is a little bit like dying » refers to a quote of Alphonse Allais, and « leaving is having a flat tire » — -where I stand before an audience and blow into a tube (A replica of Marcel Duchamp’s wheel 1913 ready-made) would not have had the impact I was looking for, had I not chosen to realize it as a performance. This hedonistic state beloved by Marcel Duchamp, a state where I find myself engaged in an action which implies exhibitionism and public voyeurism, and of course my attachment to Duchamp’s work, were the genesis of the piece. (Not to say that I was born in the same part of France as Marcel Duchamp. Normandy).